If sun, sand and sea is your idea of a pleasant winter getaway, add the Canary Islands to your holiday wish list.

Average winter temperatures in the Canaries hover around 18°C (64°F) all season. Packing for this winter escape means keeping your bulky winter coats at home and packing for spring like weather. There are seven main islands, a handful of smaller islands and islets in the Canary Island chain each worth visting. Sadly, we can’t stay all winter – so let’s explore the contrasting islands of Tenerife and La Palma. 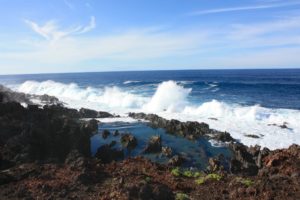 Tenerife is the largest of the islands and has something everyone; mountains, colonial villages, nightlife and beaches. Mount Teide is Spain’s highest mountain (12,200 feet/ 3,718 meters) and the third largest volcano in the world. A drive from the sunny beaches of the south coast through alpine scenery eventually leads to an other world landscape near the summit of the volcano. The best way to reach the highest point is by cable car, once at the top you can take in the amazing views of Tenerife and the Islands of Grand Canaria, La Palma, La Gomera and El Hierro. Mount Teide National Park is also home to one of the most amazing star gazing opportunities- book a tour of the observatory or indulge in a sunset and stargazing tour.

Located in the northern region of the island is the charming town of La Orotava. Lonely Planet calls it “one of the loveliest towns on Tenerife, and one of the most truly ‘Canarian’ places in the Canary Islands”. Colonial homes, dating from as early as the 16th century, line cobblestone streets. The La Orotava valley is dotted with vineyards and banana plantations and home of the unspoiled and secluded black sand beach of Playa el Bollullo. 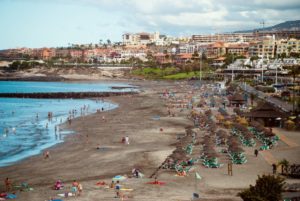 Dramatically different from its northern neighbor are the golden sands of Playa de las Américas. This southern coastal resort is bursting with nightlife, shopping and restaurants and is best known for its reputation for all night long merry making. However, the calm waters of the beach and nearby activities; including boat excursions, Siam Park (water park) and Monkey Park (zoo), also attract families to the region. Explore more of Tenerife here

Book a 30 minute flight from Tenerife (there are several each day) or take a ferry (about 3 hours) to the island of La Palma. La Isla Bonita “the beautiful island” is far removed from the sprawling resorts and heady night life of Tenerife. The capital city of Santa Cruz has retained its old world charm, a pastel rainbow of colonial styled homes overlook the coastline and historic churches occupy the cobblestone streets. This beautiful port, founded in1493 was an important stop between the American colonies and Europe, making it a fabulous place for rich historical and cultural experiences. 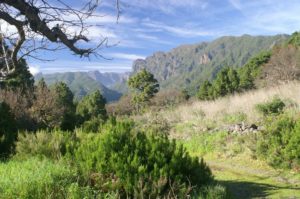 The beauty of nature is the main attraction of La Palma with its infinite array of hiking and walking trails criss-crossing the island. The paths are well marked however, a visit to this website shows the distance, difficulty level and duration of the foot paths. Enjoy a leisurely stroll through tranquil laurel woods, walk the pine forests and hike volcanic rock formations, don’t be too surprised when you happen upon a magnificent view or waterfall. If you are looking for more adventurous activities make arrangements to go mountain biking, paragliding or rock climbing.

La Palma isn’t well known for its beaches, making it easy to find peaceful solitude on the black sand of the clear blue waters of the Atlantic. Spending the afternoon at the beach sounds like a perfect way to wind down and relax after a morning hike. Start here to plan your island getaway to sunny La Palma.